What is QL Player? 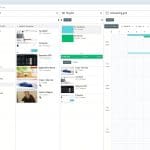 QL Player is one component of the Navori QL digital signage solution. It handles all content play-out duties and follows program instructions from its server. QL Player is available for several operating systems and devices such as Microsoft Windows, Google Android and a range of system on chip (SOC) smart displays. QL Player is a highly reliable, efficient and cost effective digital signage media player software.

The other components that make up the Navori QL solution are QL Server and QL Content Manager.

Navori QL Server is the company’s back-end content management server (CMS) that handles all user logins, content storage, schedules and programs, templates, tickers, player monitoring, proof of playback reports and QL Player program updates. QL Server is the heart of the solution. It works behind the scenes and communicates with every QL Player assigned to its network.

QL Content Manager is the user-facing dashboard. It is a web based application delivered through the user’s internet navigator. QL Content Manager includes its own template and ticker design tools to deliver a comprehensive content management and creation solution accessible over the web.

It’s a little-known fact that the “QL” in QL Player means, quantum leap. It’s an excellent description of a gem of a media player that can run circles around its competitors.

The most efficient software on the market is coded using a technique called native programming. This is when computer code is written in a language that is more directly accessible to the underlying processor embedded within the hardware. Native code does not require any translation so it’s processed immediately by the processor. There is no lag, no hesitation. No processing power is used to translate the code.

Developing native software requires more resources. It’s more complex to do so it takes longer and in the end, it costs more to develop native software than the alternate method that uses interpreted languages.

There are many software media players on the market that are based on interpreted languages. These products cost less to develop but they don’t perform as well as native software. They aren’t as efficient or reliable. Some interpreted software is based on web technologies which makes them inexpensive but they can’t compare with native software products for performance and longevity.

Navori Labs has been continuously re-investing in R&D to make QL the most efficient and reliable product in its class. The company is totally focused on digital signage software development and single minded in its purpose contrary to many other developers who carry over legacy code to save a few dollars.

QL is in its second generation, benefiting from years of refinement and enhancements which makes it alone in its class. There is simply no comparison with other digital signage media players.

4K video plays with a fluidity that is unmatched in the industry. There are no blank frames between content. No stuttering even at the highest resolutions.

QL Player can run on the smallest screens to the largest video walls with ease. Multiple videos can play fully synchronized while other content plays elsewhere on screen. QL Player supports templates with a quasi-infinite number of layers, including transparency. Users can mix any number of media types and QL player will render these programs into content that entices, informs and motivates viewers.

QL Player is made up of 3 components. They are the QL Playback Engine, QL controller and QL Guard.

QL Controller and QL Guard are two components that make up the watchdog application. They work in tandem to ensure the playback engine is always running and operating at peak efficiency. QL Controller specifically handles communication with QL Server so that any connection interruption is reported to end-users via the QL Content Manager’s monitoring window.

If any issue arises, QL Controller works with QL Server to alert users. Visual indicators change in the QL Content Manager dashboard to reflect the status of each QL Player deployed in the field. Authorized users also receive automated alert emails so they can take appropriate action.

Every module of the system works together to ensure the highest reliability possible and the watchdog will act to correct the issue on its own. If necessary, QL Player will either re-launch itself or the player device will restart to stabilize content play-out.

Navori Labs strives to deliver software that is professional-grade and designed specifically for the task at hand. Content playback is our priority and we take this mandate very seriously.

QL Player is fully compliant with today’s content delivery networks (CDNs). For example, a Microsoft Azure CDN can download content to the closest QL Players to ensure each location receives it’s required media the most efficiently possible. This is a crucial feature for very large, globally distributed networks. By delegating content propagation to a CDN, users can rest assured their content will always be ready to play regardless of the distance or even size of the media files.

CDNs represent the future of digital content distribution and Navori Labs fully supports these methods to ensure the best possible network performance over any distance. Not everyone needs to use a CDN but those who do will appreciate this feature immensely.

QL Player supports all remote data feeds. Data can be inbound from any RSS/XML/QL Server source and social media feeds are also supported. Individual players retrieve live data from their sources independently. Each player refreshes the data following the data feed settings in the QL Content Manager/Data Feed Manager. If a server becomes unavailable, QL Player will continue to display cached content and send back a notification to QL Server. This way, content is still shown on screen and users are alerted to the issue so they can take appropriate action.

QL Player supports all interactive media. Content that is interactive, like a web page or an Adobe Flash animation will remain interactive when displayed in QL Player. QL Player also includes the QL Spy interactive module. When enabled, QL Spy will monitor interactivity on a touch enabled display and trigger an event if someone touches the screen. At that moment, QL Spy will hide QL Player and replace it with interactive content. This content can be a web page, an Adobe Flash animation, a third party executable program or specific QL managed content. After a brief period of inactivity, QL Player is brought back at the forefront automatically and resumes play-out.